I am so thrilled. I’ve actually knitted something other than simple scarves, washcloths, or bandages—a feather-and-fan patterned stole in a color that reminds me of the ocean. 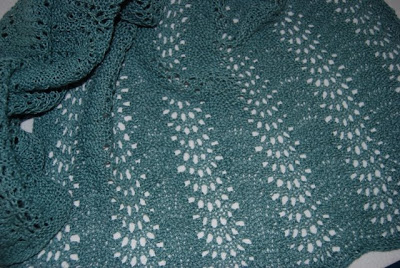 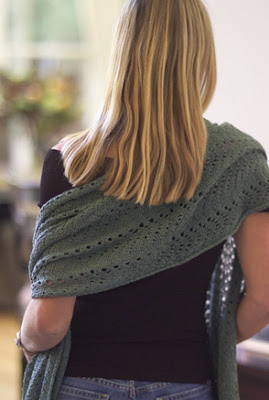 I was curious as to the pattern’s name (Lacey Stole) and the usage of the word stole as opposed to shawl. I found the following citations at Wikipedia.

The word stole derives via the Latin stola, from the Greek στολη (stolē), "garment", originally "array" or "equipment".

There are many theories as to the "ancestry" of the stole…More popular is the theory that the stole originated from a kind of liturgical napkin called an orarium (cf. orarion) very similar to the sudarium. In fact, in many places the stole is called the orarium. Therefore it is linked to the napkin used by Christ in washing the feet of his disciples, and is a fitting symbol of the yoke of Christ, the yoke of service.

The most likely origin for the stole, however, is to be connected with the scarf of office among Imperial officials in the Roman Empire. As members of the clergy became members of the Roman administration, they were granted certain honors, one specifically being a designator of rank within the imperial (and ecclesiastical) hierarchy. The various configurations of the stole (including the pallium or the omophorion) grew out of this usage. The original intent then was to designate a person as belonging to a particular organization and to denote their rank within their group, a function which the stole continues to perform today. Thus, unlike other liturgical garments which were originally worn by every cleric or layman, the stole was a garment which was specifically restricted to particular classes of people based on occupation. 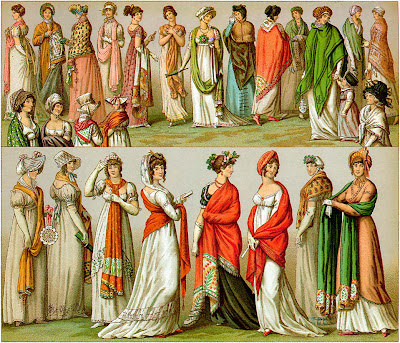 A shawl (Persian شال, Shāl, from Sanskrit: śāṭī[1]) is a simple item of clothing, loosely worn over the shoulders, upper body and arms, sometimes also over the head. It is usually a rectangular or square piece of cloth, often folded to make a triangle, but can also be triangular in shape to begin with. Other shapes include oblong shawls.

The first shawls, or "shals", were part of traditional Persian costume in Achaemenid Persia, worn by both males and females. Shawls were also part of the traditional male costume in Kashmir, which was probably introduced via assimilation to Persian culture. They were woven in extremely fine woollen twill, some were even said to be so fine as to fit through a ring. They could be in one colour only, woven in different colours (called tilikar), ornately woven or embroidered (called ameli).

Shawls are used in order to keep warm, to complement a costume, and for symbolic reasons. One famous type of shawl is the tallit, worn by Jewish men during prayers and ceremonies.

I think I’ll just call it a shawl.

I think of stoles as being rectangular in shape (think mink stole) and shawls as triangular, but hey, what do I know?

June that is absolutely beautiful! I can't wait to see a shot of you modeling it!

Oh my that is absolutely beautiful. I really love the color - how fitting for our readings.

Wow, that is an amazing stole. You are quite the knitter. But should I be shocked oxoxo Clarice

It's beautiful June! Congratulations on a fine finish!

Junie, your shawl is absolutely beautiful. I can't wait to see a photo of you modeling it. I love the pattern and the color could not be more perfect.

June! Just beautiful as everything else you touch my friend! I wanted to tell you that I have enjoyed my journey through your blog the last couple days when you were on vacation. Since, I am not taking a vacation this year it was quite enjoyable. Thank you for sharing! It was lovely!
Hugs,
Robyn

Wow! It's gorgeous and I love the color!

I was in a play once called "June Moon". It's a sweet comedy...have you ever read it?

It is very pretty June.

I'm glad to hear that you enjoyed your vacation.

Junie you are SO talented! That color is gorgeous!!!! The stitches are amazing, I am seriously in awe.

It's a beauty, June! I'm sorry I was late checking it out because you knew I was indeed waiting for this post. I love it and you will surely enjoy it. Louet is great yarn.