My list of resolutions posted in January are never far from my mind. Setting up anything with the word “resolutions” in it is fraught with potential failure as it implies a problem will be completely resolved. My list really should be called “intentions” as not everything can come to a closure—such as learning to play my flute or improving my golf game. Some things are just ongoing in life. 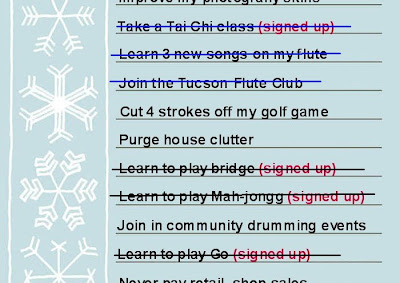 Source: The Vintage Workshop, text added by me (I've cropped the picture, too)
Learning to play the ancient game of Go has nicely been marked off the list, although it is also a continuous learning process. It’s a thinking game requiring skills in tactics, strategy, and observation, necessitating a great deal of patience.
An extremely brief and simplistic explanation of the game is that black and white stones are used. The point is to capture space—space captured is then considered dead, hence this is a game of life and death. The stones themselves are living until they, too, are captured. Essentially, Go is a game of war, conquering a geographical area means you win. 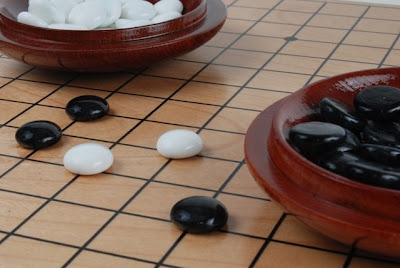 © June Scroggin, All Rights Reserved
According to Wikipedia, “Legends trace the origin of the game to Chinese emperor Yao (2337–2258 BC), who had his counselor Shun design it for his son, Danzhu—supposedly an unruly sort—to teach him discipline, concentration and balance. Other theories suggest that the game was derived from Chinese tribal warlords and generals, who used pieces of stone to map out attacking positions. Go was considered one of the four cultivated arts of the Chinese scholar gentleman, along with calligraphy, painting and playing the musical instrument guqin”.
It’s not an easy game to learn on your own. I put out feelers on the Internet and managed to connect with a Go group at the University of Arizona. One of the members kindly arranged to teach me how to play. My dad taught all of us to play chess; Go reminds me of that game. I’m enjoying my new Go adventures and, hopefully, I’ll enjoy more life in future games and much less death.

It looks so simple but I'm sure it's so complex to learn. When my children were in their middle teens we used to play games together like mancala, Mastermind, Pente, Shuttles. etc, which were all based on a similar model of moving pieces and outwitting your opponent. It was fun!

Do you play Bunco? I never heard of it but my daughter-in-law loves it and plays with a group every week. She told me its big in the west.

June, I love that you're continuing to follow through on all these really ambitious goals. Although I realize you've done it in the past, for some reason, I really like how you show us your lists :)

We homeschool and I'd heard somewhere that Go was a good game to play to teach math and critical thinking.

Still haven't figured out how to play it, though. :)

I am so proud of you, I would never do all, if I had a list. Clarice